Below is a video of the History of Wake Union 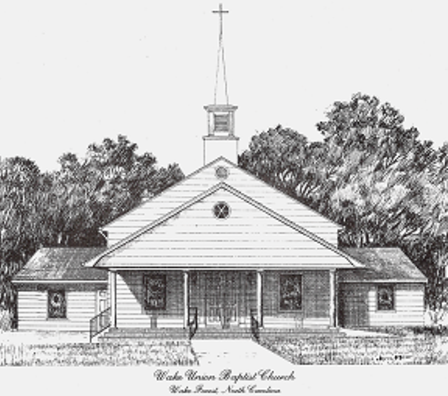 A Church that Serves

The history of Wake Union Baptist Church began with its establishment in 1789. Under the leadership of Jacob Cocker and James Weathers, four denominations agreed to erect and share a house of worship. Wake Union first met in a school house which was built about 500 yards north of its present structure. The school house was used from 1789-1792. The land for the meeting house was given by Colonel Sutherland, a prominent gentleman in his day. The people of the neighborhood united in to a kind of society or compact,

called "The Council of the United Brethren", and built the meeting house. Upon its completion the meeting house was shared by the Methodists, the High Church (Episcopalians), the Presbyterians, and the Baptists. Each denomination was entitled to use the house of worship for its own public worship services one week of each month in the following order: the Baptists, the Methodists, the High Church, and the Presbyterians. By 1883 the house was left in the sole possession of Wake Union Baptists. The other three denominations withdrew to form their own separate churches.

Wake Forest Institute first opened its doors in February, 1834. (The Institute grew into Wake Forest College, and is now the home of Southeastern Baptist Theological Seminary.) As nearly as can be determined, about thirty students were present. The closest church was Wake Union. The teachers and students of the Institute worshipped often at Wake Union. Out of the seventy students present by the end of the summer, only eighteen were professing Christians. In August, a revival began in the Institute that resulted in the conversion of thirty-five students. In October, Professor Wait baptized twenty-six of the students and twenty-three joined Wake Union.

In 1835, it was deemed wise to organize a church at the growing village of Wake Forest, even though Wake Union was little more than a mile away. Thus on August 30, 1835, Wake Forest Baptist Church was begun. Seventy persons constituted the church at the time, fourteen of whom were dismissed by the Wake Union Church for that purpose.

Wake Union’s history is rich with association with other churches and denominations in the area. The church has continued through the growing pains of our young country getting its start, many wars, the Great Depression, and anti-Christian movements of recent years. During all these many years and the associated ups and downs, Wake Union has opened its heart and doors to share Christian love with its members, friends, and the surrounding community.

Where the good news of Jesus Christ is proclaimed in truth and love.